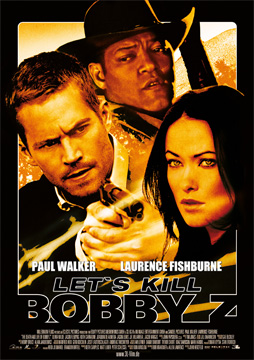 I spent the entire weekend at the movies. And not just any movies… but action packed, gun wielding films featuring some pretty hot guys.

The Death and Life of Bobby Z

I love Paul Walker. I also love Joaquim de Almeida and Laurence Fishburne. Which is how I ended up watching this travesty. The predictable plot, the over choreographed fight scenes, the implausible shoot outs, and all’s-well-that-ends-well ending only gave me a greater appreciation for Shoot `Em Up.

Though I’m generally not a huge fan of westerns, my favorite two are Blazing Saddles and Young Guns. That said — Yuma was filled with so much drama. So. Much. Drama. The shoot out at the end was ridiculous. And Ben Foster delivered an annoying, one note performance as psycho Charlie. I was praying someone would put me out of my misery and just kill him.

From the opening tight shot of Clive Owen’s eyes to the credits — this is one of the funniest films I’ve seen in a long while. Apparently the critics don’t share my sense of humor. Or that of last night’s audience who laughed throughout most of the action. One guy belly laughed through entire scenes, egging the rest of us on. Owen should win a prize for his delivery of truly absurd and clichéd zingers with a straight face. If you have not already seen this — go. If you weren’t planning to see it because of the bad reviews — go. It’s bloody hysterical!

Shoot ~Em Up was the perfect remedy to the all-too-serious gun fights of last night’s Yuma and Friday’s Bobby Z.

What films do you recommend? Or not? And what did you do this weekend?

3 thoughts on “A joke, a bore and a pleasant surprise”